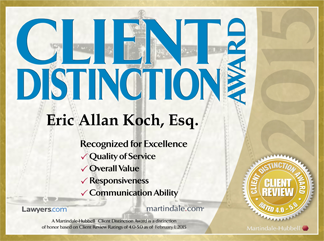 The firm is led by Eric A. Koch, who brings over 30 years of experience to his clients.

An 8th generation Hoosier, Eric grew up on a grain and livestock farm, where he learned the value of hard work and experienced the risk and rewards of the commodity markets.

He earned a Bachelor’s Degree from Georgetown University and worked on President Ronald Reagan’s re-election campaign in the Office of Political Affairs at the Reagan-Bush ’84 Committee.

While earning his Juris Doctorate at the Indiana University School of Law, he clerked at the Bloomington law firm of McDonald, Barrett & Dakich.

He currently serves as Chairman of the Senate Judiciary Committee and as a member of the Corrections & Criminal Law, Commerce & Technology, and Utilities committees.

A nationally-recognized leader in energy policy, he serves as co-chairman of the Energy Supply Task Force of the National Conference of State Legislatures, as a member of the Executive Committee of the National Council on Electricity Policy, and holds a graduate certificate in Energy Policy Planning from the University of Idaho. He also serves as a member of the Federal Communication Commission Consumer Advisory Committee. He focuses on energy, telecommunications, and water policy interactions in Indiana and nationally.

Eric frequently serves as a faculty member teaching continuing legal education courses, including for the Indiana State Bar Association and the Indiana Continuing Legal Education Forum. He enjoys teaching lawyers about new developments in the law and sharing his insights into the legislative process.

He is a registered civil mediator, having earned a civil mediation certificate from the Indiana University McKinney School of Law, studying under ADR expert John Krauss. Eric enjoys using the combination of his mediation skills and litigation experience to help parties settle cases and resolve disputes.

Eric is frequently appointed by judges to serve as a court-appointed fiduciary with responsibilities such as a trustee, federal multidistrict litigation plaintiffs’ steering committee member, special administrator, and personal representative.

A licensed Indiana title insurance producer, he founded Indiana Title Insurance Company in 2015 and serves as its President. His business experience also includes real estate, as President of White River Properties, Inc.; agriculture, as a partner in Koch Farms; and healthcare, as a former board member and Chairman of the Board of Dunn Memorial Hospital and St. Vincent Dunn Hospital.

He is a member of the Boards of Directors of Mid-Southern Savings Bank, FSB and its holding company Mid-Southern Bancorp, Inc. (NASDAQ: MSVB).